The 2019 Waukegan Yacht Club race results are now posted on the site. It took a while to compile the results because some of the racers had not submitted complete racing applications earlier.

The Waukegan Yacht Club Cruisers completed a successful cruise to St Joseph, Michigan this Sunday. The weather was perfect and the lake provided no surprises.

Three boats had planned to cruise on Friday, but one had to drop out for personal reasons. The Cruisers departed from the fuel pier around 1100. The wind was fresh from the northwest and the boats were able to achieve hull speed for the first 20 miles. Unfortunately, the wind dropped to 3-4 knots and the cruisers resorted to their engines for the remainder of the journey.

The boats covered the remaining 40 miles in good time and arrived just after midnight Eastern time at the entrance of St Joseph. The boats docked at the St Joseph River Yacht Club shortly afterward and watched in amazement as a huge lake freighter backed out into the channel. From the conversation heard on channel 72, the freighter had actually waited until the cruisers had passed safely out of the channel.

Dawn found the cruisers in good spirits and ready to explore the town. Some discovered a breakfast venue nearby and then crossed the drawbridge into downtown St Joe. The main street was alive with people shopping and dining at the local restaurants. A farmer’s market was still in full swing in a park overlooking the lake.

A couple of WYC members flew over to St Joe and met the cruisers for dinner at the Yacht Club. Everyone had a wonderful meal and enjoyed the great company.

Sunday morning came early and the cruisers were up and ready to go. The sun was bright and the sky partly cloudy. The wind was fresh again this time from the southwest. As soon as the boats passed the last lighthouse sails were up and they were off toward Waukegan at hull speed.

The wind held most of the day until the boats came within 10 miles of home. Engines were revived and the last short distance passed quickly.

The first cruiser entered harbor around 6:00 pm. After the boats were tied up and closed down, the cruisers met for a celebratory dinner at Casa de Samuels on Belvidere in downtown Waukegan. A fitting end to a wonderful adventure.

You do not need to be a member of the Waukegan Yacht Club to cruise with us. All motor and sail boats are welcome. Come join the fun!

If you want more info, send an email to sail@waukeganjosephconrad.org.

The First Annual Mayor’s Regatta started at 1100 am with seven boats participating. The race was hotly contested as the boats raced around the innovative “W” course. The W shape was to honor the yacht club’s home in Waukegan for the last 92 years. Spitfire was declared the winner of the regatta and received an award directly from Waukegan’s Mayor, Sam Cunningham.

The mayor participated in the race by sailing on Sirocco 3. Unfortunately, some boats forgot to mark their times of finish and could not be scored.

The Mayor’s Regatta has been added to the club’s official schedule and is sure to become one our popular traditions.

The first cruise for Waukegan Yacht Club went off with a bang Saturday! We were supposed to cruise to Montrose Harbor in Chicago, but the wind and weather dictated a change. The Cruisers decided to switch it up and sail to Kenosha, Wisconsin instead.

The cruise north went off smoothly. Departure started after 9 am and sails were raised by 9:30. The wind was a steady 12-14 knots from the south and the pace was a good 6 knots most of the way.

A storm blew up just after the first boat arrived and fog settled down for most of the afternoon, but we had a blast. One boat docked at the Kenosha yacht club while the other reserved a pier in the marina.

We found a great Irish pub near the harbor and waited out the rain with food and drink. Afterwards the cruisers met up at a wine bar. As the evening closed in we decided to gather aboard one of the boats and had an impromptu party.

The next club cruise is set for Aug 9-11 to Michigan! Don’t miss it.

The commemorative t-shirt for the 2019 Chicago-Waukegan Race is now available for pre-order. This year’s shirt features an original design that honors two great cities and a historic sailboat race. Over 100 sailboats are participating in this year’s race and all the names of the racing boats are featured on the back of the shirt.

Order your shirt(s) today to be guaranteed delivery on Saturday, June 22. Shirts ordered before Saturday, will be available for pickup at the club after the race. Only a limited number are being made. Don’t miss your chance to capture a bit of history.

No room for additional guests

Previously registered and paid students of the last two classes are welcome to repeat the class at no cost. Repeating student will not receive binders or printouts but may purchase them, if desired. New students receive priority seating at the front of the classroom.

If you would like to repeat the class you must RSVP in advance.

The Last Race, Race drew over 20 boats to participate in our last port-to-port race for 2018. Boats sailed down from Kenosha that morning and Waukegan boats came over to dock at the club for our Le Mans start sequence. The sun came out and the wind died as the racers left the harbor and for the first hour the boats floated just past the breakwater by the red lighthouse.

About an hour passed and a line of clouds moved in from the west and brought some light winds that built all morning and into the afternoon. Most boats arrived in Kenosha before 3pm. Leading the way was Madcap Express which took the trophy but everyone had a great time for the last major race of the season.

The wind clocked around to the east overnight and built to 15 knots or higher. Four foot waves were pushed in from the east and provided a bumpy ride for the boats that stayed at the Kenosha Yacht Club that night. In the morning, the race back was canceled due to weather, but the concern over high winds and choppy waters was misplaced. The wind and waves fell off all morning until by 1pm the lake was nearly calm and the winds dropped to 5 knots or less.

On Sunday only two boats decided to race back to Waukegan. Lucille Marie was the only boat that completed the entire race under sail. At the 2019 Sail-A-Bration the Last Race, Race trophy was presented to Captain Jim Maivald and his crew Howard Larson. 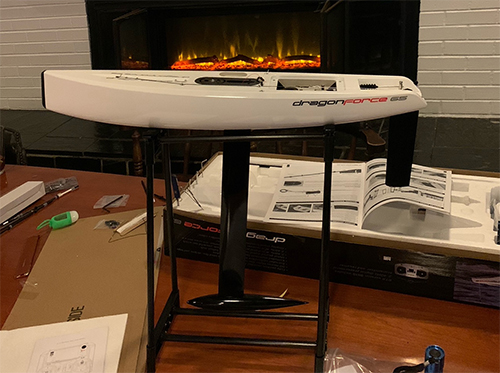 Final build Saturday! Saturday – Feb 13 – 10am Correction: RC boat build continues on Saturday, Feb 13.Only the practice racing was postponed. Sorry for the confusion  Doors open at 10am! [...]

The RC Regatta scheduled for Saturday, February 13, 2020 is POSTPONED due to weather.

All interested Members, Guests and Racers are invited! Come learn  how to build and sail DragonForce 65 sailboats and other radio control boats. Boat Build and DiscussionWednesday, Feb 104-9 [...]

2021 is starting off on a good foot. The Club has not been this active for many years! Plans are underfoot to really have an amazing year.  Last night, the […]